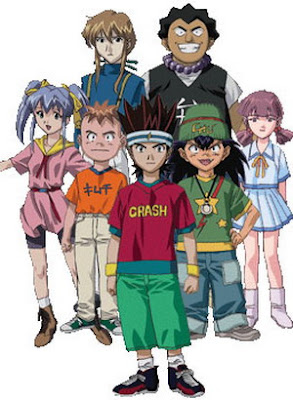 Type: TV
Episodes: 22
Status: Finished Airing
Aired: Nov 30, 1998 to Sep 10, 1999
Premiered: Fall 1998
Broadcast: Unknown
Producers: Shogakukan-Shueisha Productions
Licensors: None found, add some
Studios: Xebec
Source: Manga
Shunichi Domoto is a talented, sportive 5th grade boy who is used to help sport teams in his school. He enters a Yoyo duel against a bully boy called Benkei to help his friend, Beso, to get back his Yoyo which was stolen by the bully. He beat him, but after that, he meets the exceptionally gifted Yoyoer, Seito Hojoin, who beat him while he ridiculed the Yoyo game. So, Shunichi enters Japan's Yoyo championship to get his revenge from his loss with Seito. Throughout this Championship, he learns new Yoyoing Skills and meets powerful rivals.
(Source: ANN)
DOWNLOAD
[clampschool] Eps 01 Bertarung dengan Yoyo
Share This